Alejandro Varela is a writer based in New York. His work has appeared in The Point Magazine, Boston Review, Harper’s Magazine, The Rumpus, Joyland Magazine, The Brooklyn Rail, The Offing, Blunderbuss Magazine, Pariahs (an anthology, SFA Press, 2016), the Southampton Review, The New Republic, and has received honorable mention from Glimmer Train Press.

Varela is a 2019 Jerome Fellow in Literature. He was a resident in the Lower Manhattan Cultural Council’s 2017–18 Workspace program, a 2017 NYSCA/NYFAArtist Fellow in Nonfiction, and an associate editor at Apogee. His graduate studies were in public health. His debut novel, The Town of Babylon, was published by Astra House in 2022 and was a finalist for the seventy-third National Book Awards. His second book, The People Who Report More Stress, will be out this year.

Varela believes strongly in reparations, land back, a national health service, and a thirty-dollar minimum wage pegged to inflation as interventions essential for the collective liberation of our society. Access his work at alejandrovarela.work. You can also find him on Twitter and IG: @drovarela. 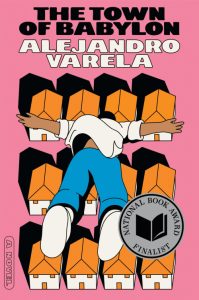