Cathy Fussell has been a practicing fiber artist for more than fifty years. She has been sewing and working with textiles since her early childhood in Buena Vista, Georgia, her hometown. Today, she maintains a studio in Columbus, Georgia, where she specializes in making art quilts and related works in fabric. Cathy retired from Columbus State University (CSU) in 2011 following a long career as an English teacher—first in the Muscogee County School District and later at CSU, where she also directed CSU’s Carson McCullers Center for Writers and Musicians.

Cathy’s art is held in a number of public collections. Included among them are two major works in the Fulton County (Ga.) Public Arts Collection; six large pieces in the Memorial Sloan-Kettering Koch Collection in New York, New York; and two pieces in the Alabama Department of Archives and History in Montgomery. Additional examples of her artwork have been exhibited in numerous juried and curated art exhibitions around the South and beyond, and her work is held in dozens of private collections around the nation and abroad.

In 2016 Cathy was commissioned by the prestigious Congressional Club in Washington, D.C., to make a special quilt for First Lady Michelle Obama. The result was “Apollo Splashdown Revisited—Homage to Alma Woodsey Thomas.” That piece was presented to Mrs. Obama by the Congressional Club at their Annual First Lady’s Luncheon during the final year of the Obama presidency. That work will be included in the collection of the Barack Obama Presidential Library in Chicago.

Fred C. Fussell is an artist, writer, and documentary photographer whose work focuses on the American South. His books include Blue Ridge Music Trails: Finding a Place in the Circle; Pot Liquor: Tales and Recollections Told by the People of Stewart County, Georgia; A Chattahoochee Album: Images of Traditional People and Folksy Places around the Lower Chattahoochee River Valley; and Memory Paintings of an Alabama Farm: The Paintings of Jessie DuBose Rhoads, Folk Artist. He also wrote two major essays for The New Georgia Guide and has written numerous other print and online articles for local, regional, and national publications.

As a museum professional, Fred has served as assistant director of Westville, chief curator of the Columbus Museum, director of the Chattahoochee Folklife Project, and curator of the Gertrude “Ma” Rainey House and Blues Museum. In 2004, his book Blue Ridge Music Trails was awarded the Presidential Award for Heritage Tourism by President George W. Bush. Fred was a 1991 recipient of the Georgia Governor’s Award in the Humanities. He currently works as an independent artist, sharing a studio at Swift Mills Lofts in Columbus with his wife, Cathy. 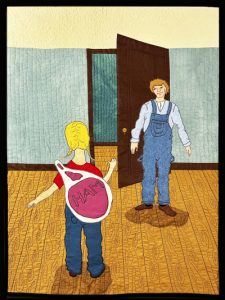