In his fiction debut, Last of the Better Days Ahead, readers are treated to a deep dive into the architecture of a group of Charlie’s songs. Like old, well-hewn gospel songs, there is both darkness and light. There are tales of childhood, families, cantankerous uncles and aunts, and slightly lost individuals. Through keyholes opening into rays of light, the reader watches the lives of everyday humans unrolling in unheroic yet poetic and unvarnished ways that those that love Parr’s songs will cherish. As Abraham Smith writes in the book’s introduction, “It’s a great plenty and promises plenty more. I know I feel a delicious undertow on the final page; can’t wait to start again at word one; and then to find a good walking stick for Charlie’s next river road of prose.”​

Charlie Parr’s newest album, Last of the Better Days Ahead, is a collection of powerful new songs about how one looks back on a life lived, as well as forward on what’s still to come. Its spare production foregrounds Parr’s poetic lyricism, his expressive, gritty voice ringing clear over deft acoustic guitar playing that references folk and blues motifs in Parr’s own exploratory, idiosyncratic style.

When it comes to what it all means, Parr says it best: “Last of the Better Days Ahead is a way for me to refer to the times I’m living in. I’m getting on in years, experiencing a shift in perspective that was once described by my mom as ‘a time when we turn from gazing into the future to gazing back at the past, as if we’re adrift in the current, slowly turning around.’ Some songs came from meditations on the fact that the portion of our brain devoted to memory is also the portion responsible for imagination, and what that entails for the collected experiences that we refer to as our lives. Other songs are cultivated primarily from the imagination, but also contain memories of what may be a real landscape, or at least one inspired by vivid dreaming. The album represents one full rotation of the boat in which we are adrift—looking ahead for a last look at the better days to come, then being turned around to see the leading edge of the past as it fades into the foggy dreamscape of our real and imagined histories.” 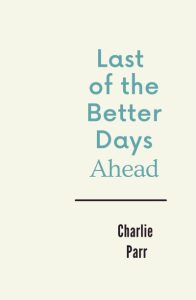