Eli Cranor lives and writes from the banks of Lake Dardanelle, a reservoir of the Arkansas River nestled in the heart of True Grit country. His work has won the Greensboro Review’s Robert Watson Literary Prize and been featured in Missouri Review, Oxford American, Ellery Queen, the Strand, and others. Cranor also pens a weekly column “Where I’m Writing From” for the Arkansas Democrat-Gazette, and his craft column, “Shop Talk,” appears monthly at CrimeReads. His critically acclaimed debut novel, Don’t Know Tough, won the Peter Lovesey First Crime Novel Contest.

In Cranor’s latest novel Ozark Dogs, Vietnam War veteran Jeremiah Fitzjurls takes over the care of his granddaughter, Joanna, after his son is convicted of capital murder. Raising her with as much warmth as can be found in an Ozark junkyard outfitted to be an armory, Jeremiah teaches her how to shoot and fight, but there is not enough training in the world to protect her when the dreaded Ledfords—notorious meth dealers and fanatical White supremacists—come to collect Joanna as payment for a long-overdue blood debt.

Headed by rancorous patriarch Bunn and smooth-talking, erudite Evail, the Ledfords have never forgotten what the Fitzjurls family did to them, and they will not be satisfied until they have taken an eye for an eye. As they seek revenge, and as Jeremiah desperately searches for his granddaughter, their narratives collide in this immersive story about family and how far some will go to honor, defend, or in some cases, destroy it. 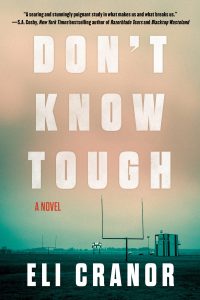