Gabriela Alemán was born in Rio de Janeiro, Brazil. She received a PhD at Tulane University and holds a master’s degree in Latin American literature from Universidad Andina Simón Bolívar. She currently resides in Quito, Ecuador. Her literary honors include a Guggenheim Fellowship in 2006; membership in the Bogotá 39, a 2007 selection of the most important up-and-coming writers in Latin America in the post-Boom generation; one of five finalists for the 2015 Premio Hispanoamericano de Cuento Gabriel García Márquez (Colombia) for her short story collection La muerte silba un blues; and winner of several prizes for critical essays on literature and film. Her novel Poso Wells was published in English translation by City Lights in 2018.

Her latest book is Family Album: Stories, translated from the Spanish by Dick Cluster and Mary Ellen Fieweger and published by City Lights in 2022. In this collection of in eight stories, she teases tropes of hardboiled detective fiction, satire, and adventure narratives to recast the discussion of national identity. From a pair of deep-sea divers looking for sunken treasure in the Galapagos Archipelago, to a night with the husband of Ecuador’s most infamous expat, Lorena Bobbit, this series of cracked “family portraits” provides a cast of picaresque heroes and antiheroes in stories that sneak up on a reader before they know what’s happened: they’ve learned a great deal about a country whose intriguing story is ripe for the telling. 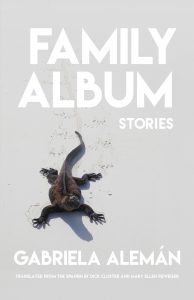