Bestselling and award-winning author Megan Abbott is revered for her suspense writing that explores the dark underbellies and competitive atmospheres of intimate, powerful, and vulnerable spaces traditionally reserved for women.Her most recent book, The Turnout, is a revelatory and mesmerizing new novel set against the hothouse of a family-run ballet studio during an intense and fraught season of the ballet company prepping for The Nutcracker. The story reveals the callouses, bruises, violence, and yearning lurking just beneath the lovely surfaces of the pink and the tutus. With uncanny insight and hypnotic writing, The Turnout is a sharp and strange dissection of family ties and sexuality, femininity and power, and a tale that is both alarming and irresistible solidifying Megan Abbott at the height of her career.

Abbott has been working in the TV world for nearly a decade as was a staff writer for HBO’s hit show, The Deuce and co-creator and co-showrunner of her own show, Dare Me, which completed its first season on the USA Network and is now on Netflix internationally. With Dare Me, she strived to make it a women-led, women-centered show in all departments. Abbot is currently adapting The Turnout as a limited TV series for eOne. 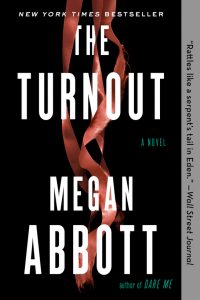