S. A. Cosby’s new novel, Razorblade Tears follows the phenomenal reception to Blacktop Wasteland, a novel that reinvents and reclaims the southern noir narrative. While Cosby’s earlier novel started with the high-octane roar of a street race, Razorblade Tears begins with a policeman’s knock. Ike and Buddy Lee have their sons’ deaths in common—and the child their sons left behind—and as far as Ike is concerned, nothing else. Ike is a successful Black business owner still married to his son’s mother. Buddy Lee, a lost White man, drinks too much, is a bit of a jokester, and more easily mixes with rough motorcycle renegades than the high-end society type his ex-wife married. Standing in the graveyard where their sons are being laid to rest, they also unknowingly share more. They are both ex-cons, and they each bear a gut-wrenching shame: they lost their boys years ago when they rejected them for loving each other. And now they can think of only one way to make amends. The risks are high: prison, death, and an unleashing of the hard, violent men each had vowed not to be again.

Cosby’s understanding of the lives of his characters runs as deep to the bone as it did in Blacktop Wasteland. With the pairing of these two men, Cosby explores the human terrain of his South, its sorrowful legacy and its inexorable pull on those, Black and White, who call it home.

From southeastern Virginia, Cosby now resides in Gloucester, Virginia. His short fiction has appeared in numerous anthologies and magazines. His short story “The Grass beneath My Feet” won the Anthony Award for best short story in 2019. He is also the author of My Darkest Prayer and Brotherhood of the Blade. His writing is influenced by his experience as a bouncer, construction worker, retail manager, and—for six hours—a mascot for a major fast-food chain inside the world’s hottest costume. When he isn’t crafting tales of murder and mayhem, he assists the dedicated staff at J. K. Redmond Funeral home as a mortician’s assistant. He is an avid hiker and is also known as one hell of a chess player. 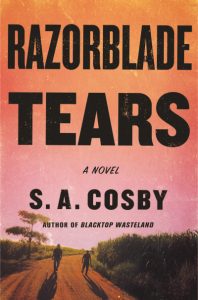